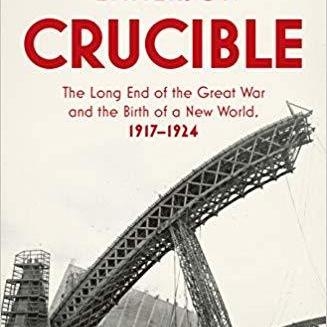 In Petrograd a fire is lit. The Tsar is packed off to the Urals. A rancorous Russian exile crosses war-torn Europe to make his triumphal entry into the capital. 'Peace now!' the crowds cry... German soldiers return from the war to quash a Communist rising in Berlin. A former field-runner trained by the army to give rousing speeches against the Bolshevik peril begins to rail against the Jews... A solar eclipse turns a former patent clerk from Switzerland into a celebrity, shaking the foundations of human understanding with his revolutionary theories of time and space... In Paris an American reporter in search of himself writes ever shorter sentences and discovers a new literary style...

Lenin and Hitler, Einstein and Hemingway, Sigmund Freud and André Breton, Emmeline Pankhurst and Mustafa Kemal - these are some of the protagonists in this dramatic panorama of a world in turmoil.

Emperors, kings and generals depart furtively on midnight trains and submarines. Women are given the vote. Artistic experiments flourish. The real becomes surreal. Marching tunes are syncopated into jazz. Civilisation is loosed from its pre-war moorings. People search for meaning in the wreckage. Even as the ink is drying on the armistice that ends the war in the west in 1918, fresh conflicts and upheavals erupt elsewhere. It takes six years for Europe to find uneasy peace.

Crucible is the collective diary of an era: filled with all-too-human tales of exuberant dreams, dark fears, grubby ambitions and the absurdities of chance. Encompassing both tragedy and humour, it brings immediacy and intimacy to a moment of deep historical transformation - with consequences which echo down to today.